Isfahan was once one of the largest and most important cities in Central Asia, positioned as it is on the crossroads of the main north-south and east-west trade routes that cross Central Asia. The city was the splendid capital of the Seljuq and Safavid dynasties, and is renowned for its beauty, which has given rise to the Iranian saying that “Isfahan is half the world”.

Commerce has always been central to the growth of Isfahan, to the extent that the Safavid Shah Abbas I (1588-1629) effectively re-routed the Silk Road through Isfahan and made the city his capital so that his empire would enjoy a trading monopoly. By the seventeenth century, the city attracted not only European merchants but also missionaries and mercenaries, as it became a religiously tolerant centre of mercantile and diplomatic activity in which merchants and travellers from a variety of cultures and religions rubbed shoulders.

Isfahan first rose to international prominence as the capital of the great Seljuq Empire (1038-1194) which stretched from Central Asia to Syria. The Seljuqs had a huge impact on the cultural and architectural development of the city, and the consolidation of their empire was also significant in unifying a territory that had been competed for by diverse ethnic groups in central Asia for centuries; mainly, Arabic, Turkish, and local Iranian peoples. Under the Seljuqs, a new, uniquely Iranian, eastern Islamic architecture emerged in the city, and in particular, the traditional mosque layout (brought to Iran in 749 by its first Islamic rulers, the Abbasids) was replaced by a new design, based around four iwans (vast halls, open at one end), as represented in the Great Friday Mosque, the Masjid-i Jami. The Seljuq Turks excelled in the design of very large vaulted spaces and in the decorative articulation of buildings inside and out using complex brick patterns, and promoted the custom of organizing important urban buildings around an open, a large rectangular town square, known as a maidan.

The Seljuqs also introduced large domed chambers into mosques in Iran. The domed chamber was known in the western Islamic mosques (Damascus, Cordoba, and others), where it usually served as a maqsura, a space reserved for the sultan and his court in the prime position in front of the mihrab (the niche indicating the direction of prayer toward Mecca.) The Seljuqs built unprecedentedly large examples of these domes, the first of which was inserted in the Great Friday Mosque at Isfahan in 1086-7.

The Safavid Empire (1502 - 1736) saw a further development of Isfahan, although the city was not chosen straight away as the imperial capital.  Shah Abbas I, who reigned from 1588 to 1629, made the decision to move the capital from Qazvin to Isfahan in 1590, motivated both by the city's enormous economic potential and position at the crossroads of trade, and by concerns for security, given its central location at a safe distance from troubled borderlands. Favourable historical associations also set Isfahan apart from other Iranian cities – as the Seljuq capital, it associated Abbas with an illustrious dynasty of the past.

The Safavids were a local, Iranian dynasty. It was not until the reign of Shah Abbas I that the city was renovated in a style that broke with Seljuq tradition, with the construction of many of the monuments and buildings for which Isfahan is renowned today. Wealth and labour were used to build bridges, roads and caravanserais to encourage and facilitate trade. The imperial household was transferred there, and followed by merchants and artisans who relocated along with them.

At the centre of the new city, a magnificent new maidan (city square) was constructed, some 510 by 158 meters, named the "Design of the World" Maidan (Maidan-i Naqsh-i Jahan). Its design united all of the facets of the Safavid polity into one spatial diagram: worship (the Shah Mosque), commemoration (the Mosque of Sheikh Lutfallah), sovereign administration (the Imperial Palace), and trade (Qaisariya Bazaar).

Abbas I's designers differentiated the new city from the old historical centre by organizing the street patterns on grids that were not oriented toward Mecca. The old and new maidans were connected by the winding covered street of the Great Bazaar, which ran for two kilometres and was covered by high stone and brick vaults by the order of Abbas I. English and Dutch traders lived near the bazaar, as Isfahan was home to one of the East India Company's warehouses. Where the Great Bazaar met the new maidan, a group of buildings were built constituting the Qaisariya Bazaar (that is, the Imperial Bazaar, built and maintained by the emperor). They housed imperial manufactures (wholesale silks and fine textiles, goldsmiths, silversmiths, jewellers), the state mint, a hospital, public bath, and a caravanserai. Unlike the shops of the Great Bazaar, these were arranged on a regular grid and aligned with the new city. Their importance to the regime was represented by the Qaisariya Gateway to the square; no other imperial bazaar in the Safavid realm had such a monumental entrance.

A number of major religious buildings were also constructed in Isfahan in this period; including the Mosque of Sheikh Lutfallah (1603-1619), conflating the style of a mausoleum and a mosque, and the Shah Mosque (1611-1666) which has a towering 170-foot high domed chamber. Unprecedented use of colour dominates the decoration of the entrance gateways, domes, minarets, and some interior spaces of these buildings. The use of polychromatic tile as a surface ornament was known in other periods of Iranian history, but it was the Safavids who established colourful tiling as the most salient characteristic of Iranian architecture, and this decorative style reached its zenith in Isfahan. 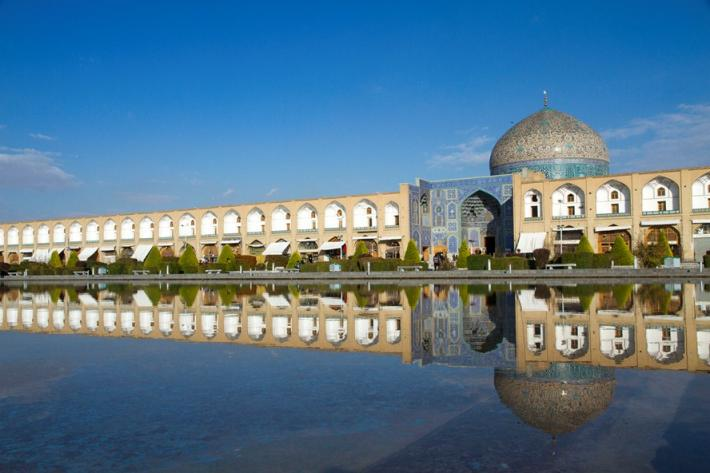 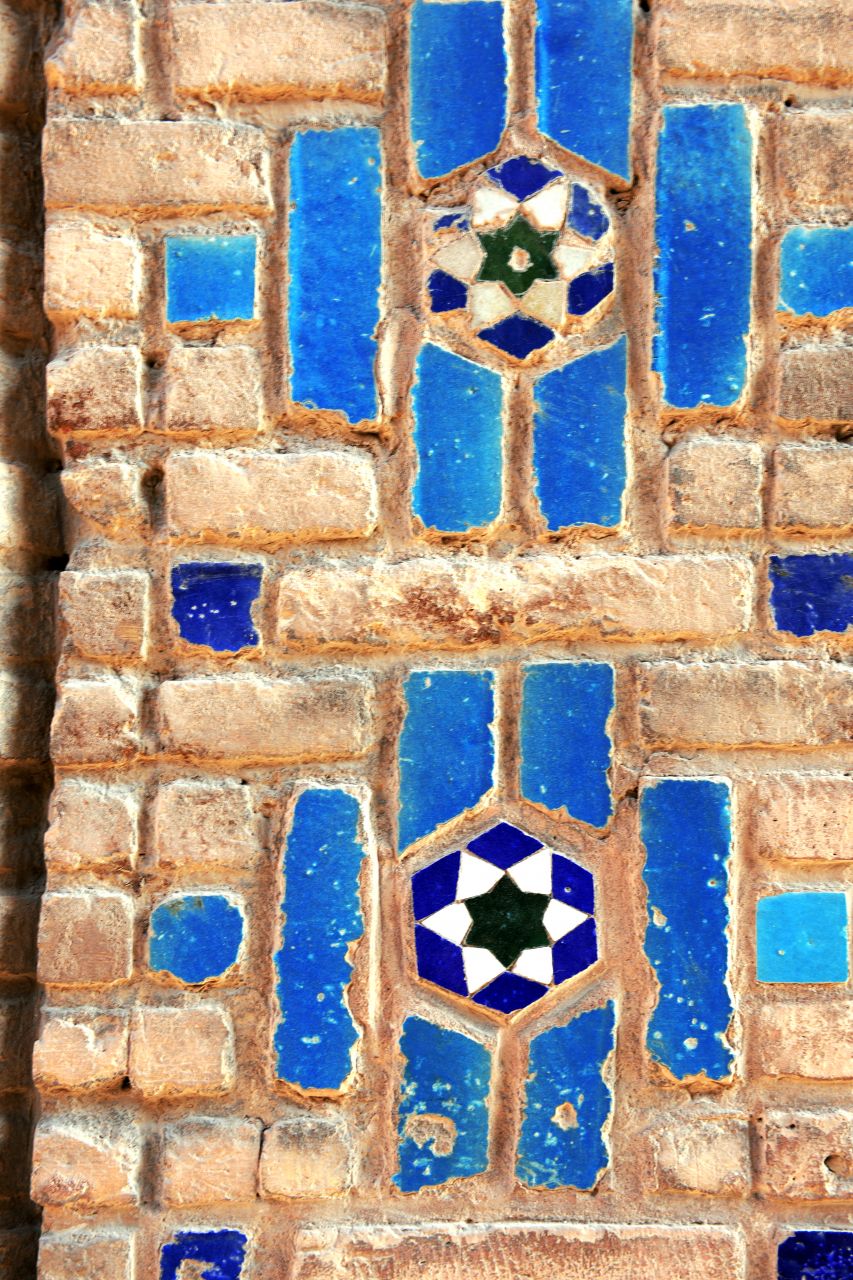 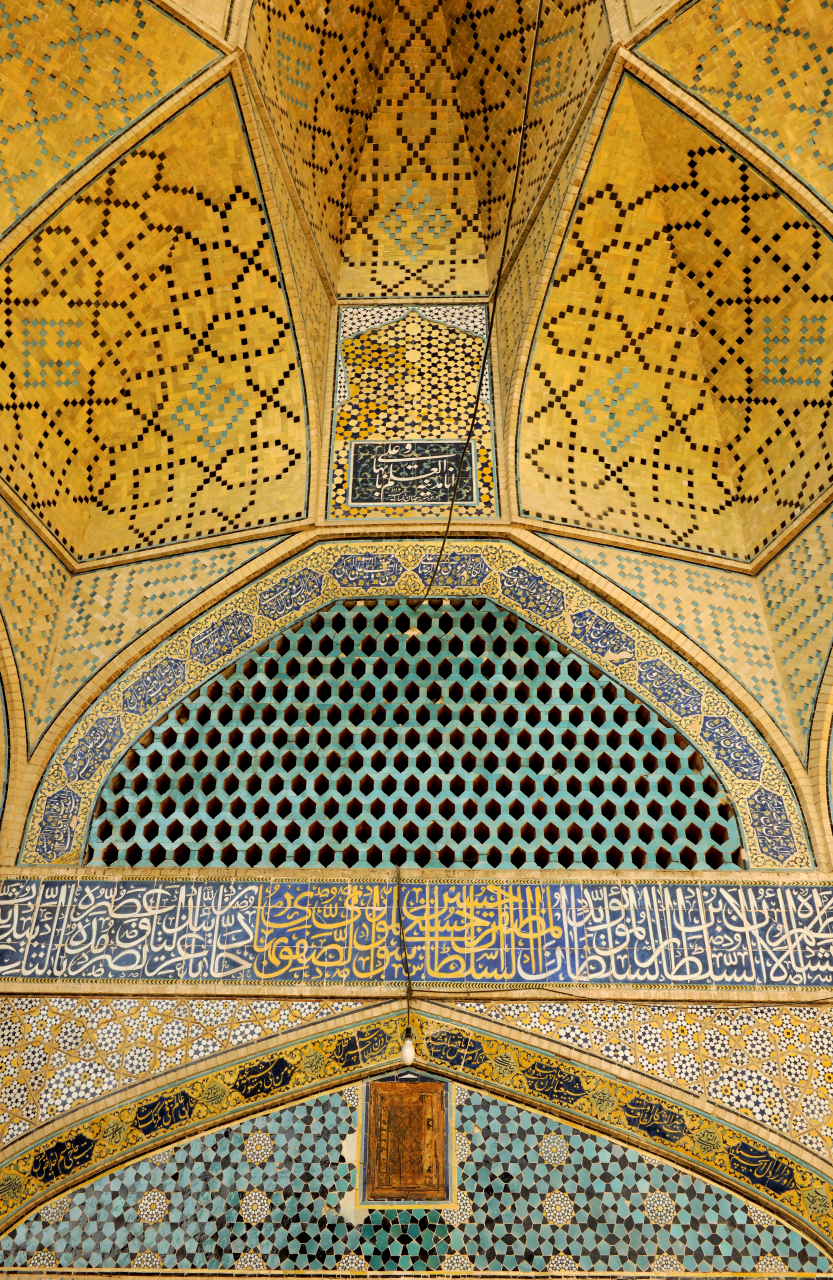 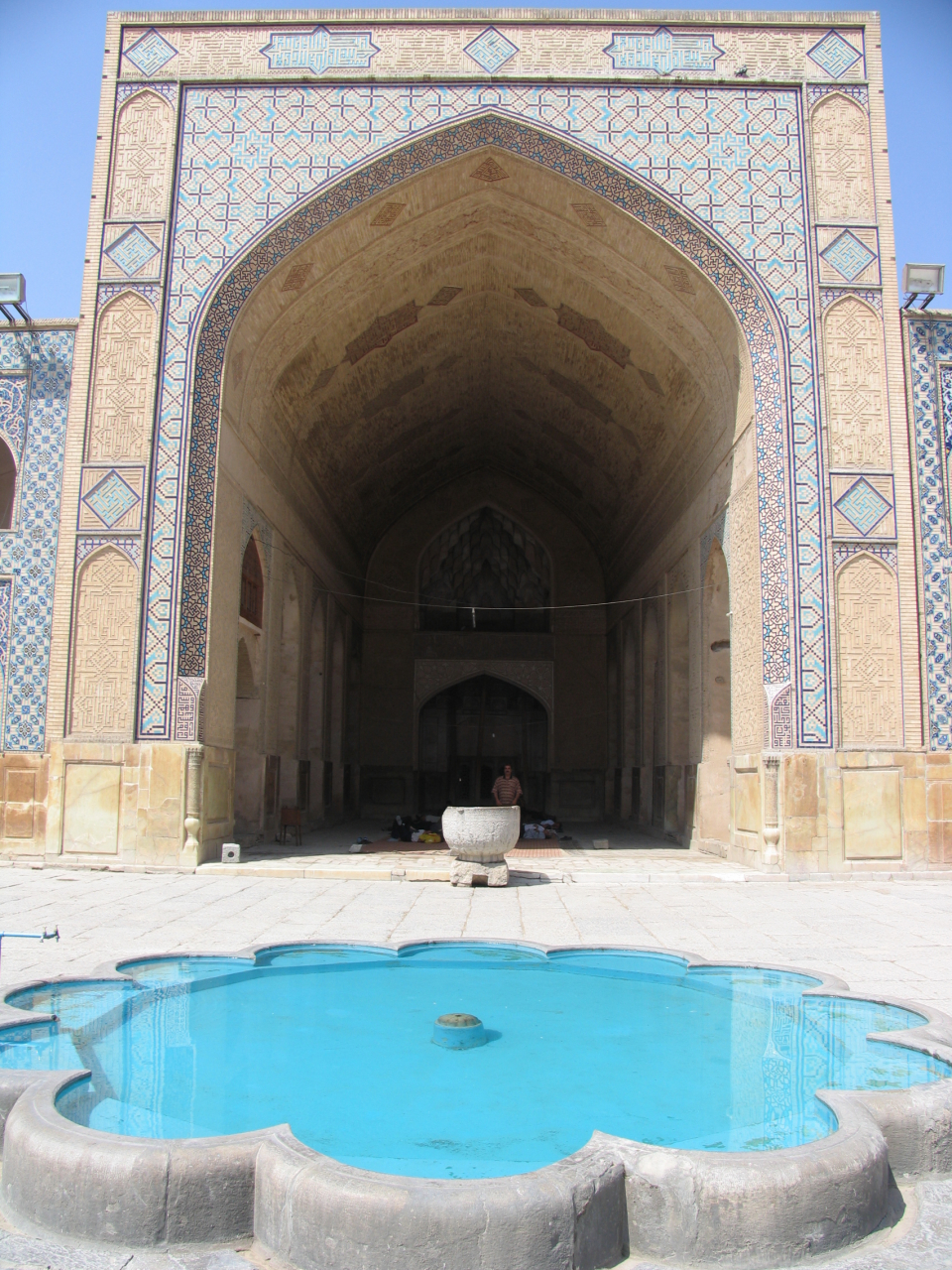 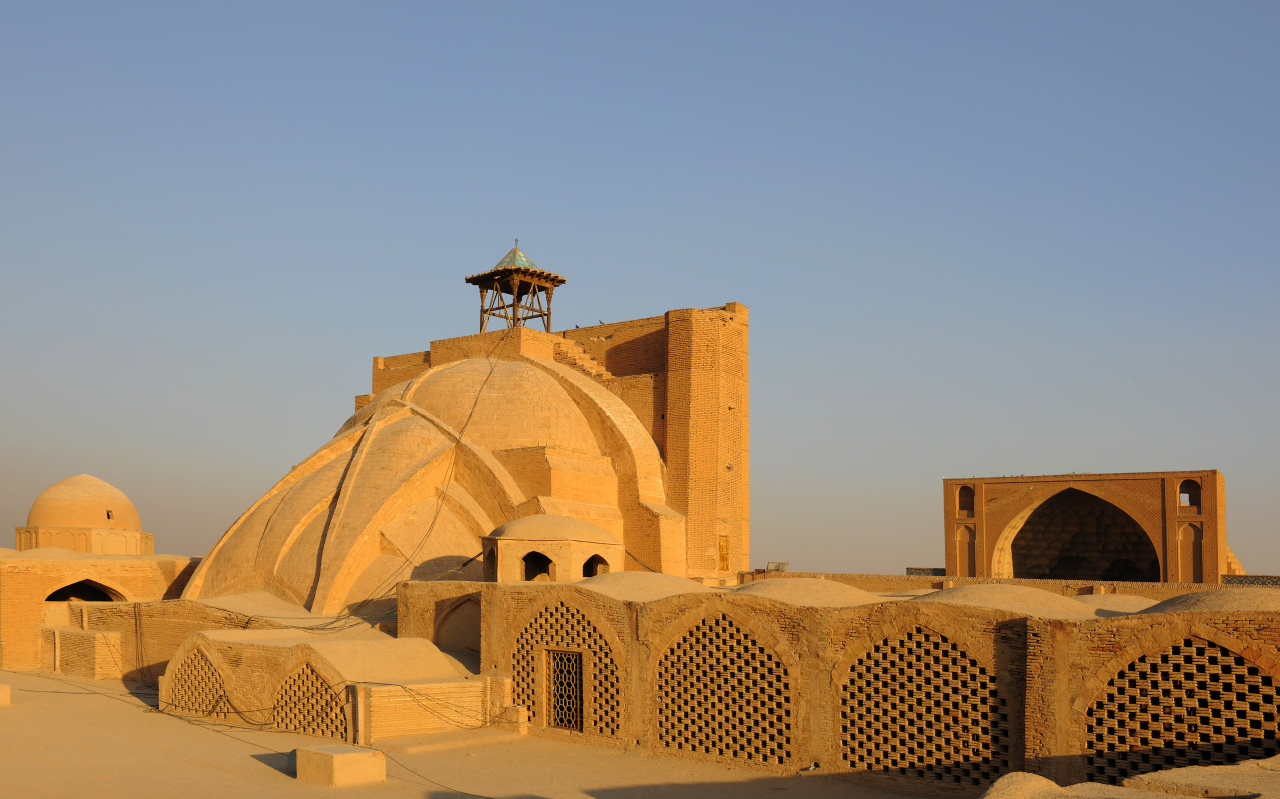 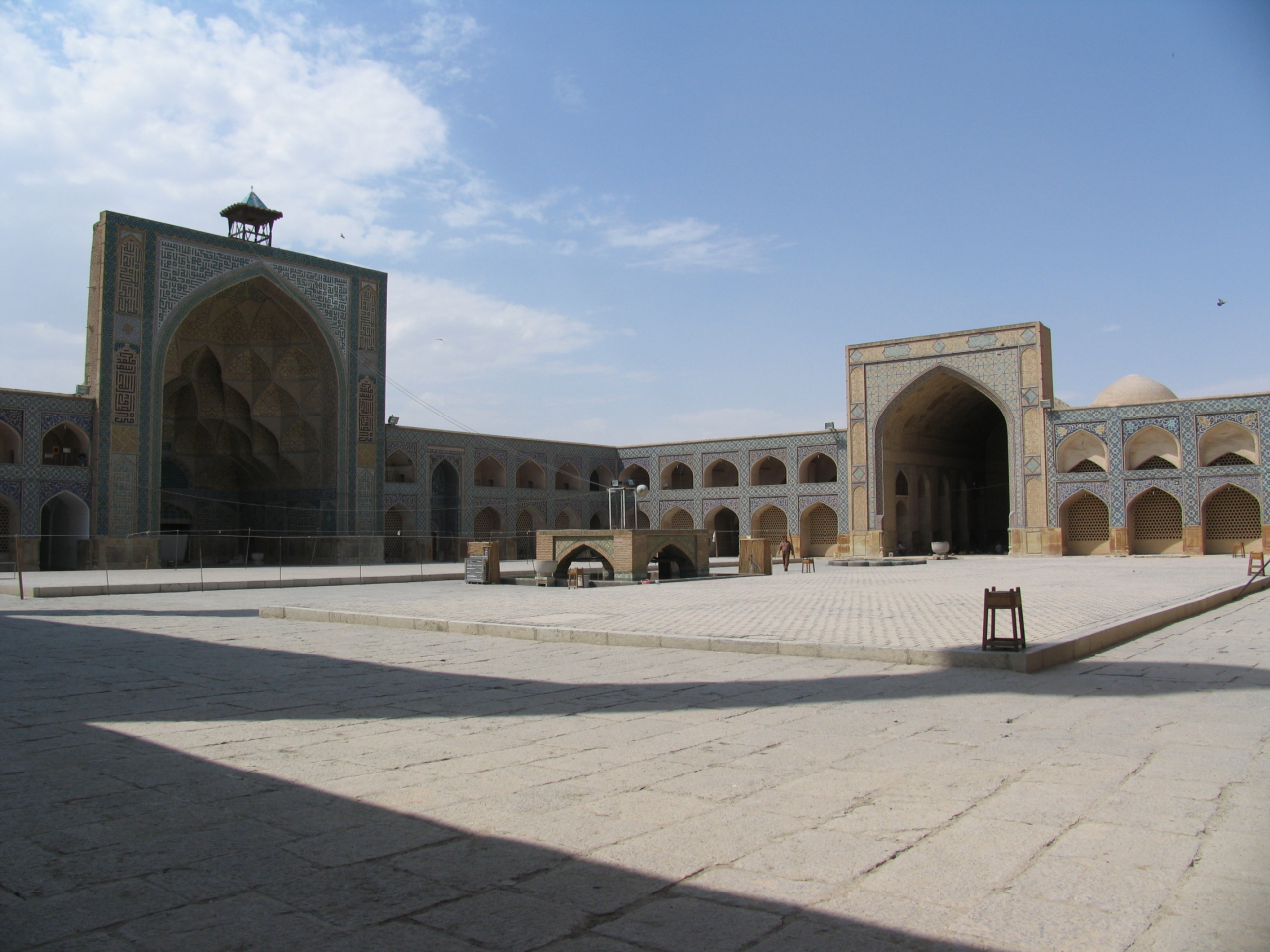