Commencing around the 8th century CE, merchants from the Islamic world began to embark on expansive maritime trade across the Indian Ocean, linking the Arabian Peninsula, with East Africa, including the Island of Madagascar, the Indian Subcontinent and China. This maritime activity, which involving travelling vast distances by sea, required perfecting a navigation technique which humans have used throughout history, celestial navigation. Celestial navigation uses the planets, the moon, sun, or other stars in the sky as fixed points by which to locate oneself and navigate. In fact, fairly precise navigation by observation of the stars alone, without the need for any instruments, is possible when done correctly. As any given star rises and sets on the horizon at the same fixed azimuth (the angle between North, measured clockwise around the observer’s horizon, and a celestial body) they form a natural compass. This star compass was used by both Arab and Chinese navigators when crossing the Indian Ocean. Indeed, the vast deserts, mountains, and oceans of the Silk Roads formed the ideal environment in which to do this, as they were relatively free from light pollution and thus provided a clear and unimpeded view of the stars in the night sky.

Astronavigation requires star charts which enable the navigator to identify specific stars in the sky via their location within various constellations. The earliest known document from the Islamic world to catalogue the stars and chart their constellations is the Arabic text kitāb suwar al-kawākib, the ‘Book of Fixed Stars’, which was compiled by the Persian astronomer Abd al-Rahman al-Sufi around the year 964 CE. The Book of Fixed Stars represents a synthesis of the astronomy works of Roman mathematician and astronomer Ptolemy (100 – 170 CE) combined with the astronomical traditions of the Arabian Peninsula as well as other observations from along the lengths of the Silk Roads. Although there is no surviving copy of the original text, the many later copies which have survived are a testament to its importance in the development of Medieval astronomy. Following the format of Ptolemy’s Almagest, a 2nd century CE text on the motions of the stars and planets, al-Sufi set out his work constellation by constellation presenting each with two accompanying illustrations from different perspectives, one as seen in the sky and the other as a mirror image as seen from above (as it would be depicted on a globe).  As such the Book of Fixed stars reflects the concerns of Islamic scholars of the time, who in the field of astronomy needed to provide the basis for precise navigation across the Indian Ocean allowing merchants ships to reach the East Coast of Africa, the Indian Subcontinent, and China.

Furthermore, it is important to situate this astronomical text within the context in which it was produced and the environment which made its production possible. The Book of Fixed stars was produced during the great translation movement of the Islamic world which took place in centres of learning such as Baghdad from the mid-8th to late-10th century CE. During this time, many texts from both the Ancient World (Ancient Greek, Roman, Mesopotamian, and Egyptian) as well as texts from along the lengths of the Silk Roads namely from the Iranian Plateau and Indian Subcontinent, were translated into Arabic by scholars working in institutions of learning who had access to vast libraries in which much of the accumulated knowledge of humankind was stored. As such, the Book of Fixed Stars, as a number of texts produced during this time were, was an important contribution to the academic shift to observational and theoretical astronomy which was set in motion by the translation movement wherein Classical knowledge was re-discovered, re-organised and classified, to be synthesised with newly developed bodies of knowledge.

Moreover, the Silk Roads themselves played an extremely important role in this translation movement in a number of ways. First of all, this intense academic work relied heavily on the ready availability of paper which was introduced to the Islamic world some time in the late 7th or early 8th century CE, coinciding with the start of the translation movement. Soon after, the technology used to make paper was introduced from along the Silk Roads, originating in China. The introduction of this technology meant that vast quantities of paper could be produced, which was cheaper and easier to make than the parchment which preceded it. Paper making in Baghdad began in the late 8th century for administrative, literary, and scientific purposes, precipitating a great flourishing in written culture and academic texts in Geography, Medicine, Mathematics, and of course Astronomy.  Secondly, the Silk Roads provided a backdrop of rich exchange between peoples from different cultures which aided the translation of texts and exposed those working in the academic fields to different knowledge bases, as well as rendering scholars more mobile allowing them to work in new cities and academic centres and providing channels through which knowledge could be exchanged. The resulting developments in the fields of Astronomy and Astronavigation then in turn further aided these rich interactions by greatly improving maritime navigation. 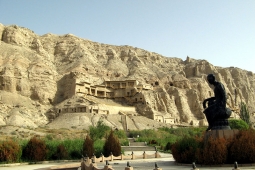 The Kizil caves are a large complex of rock cut Buddhist caves located on the northern bank of the Muzart River in Xinjiang, China. 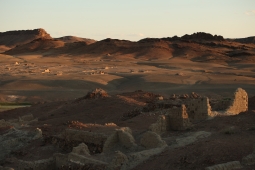 Cross-Cultural Elements Evident in a Steppe Headdress and Earrings

Throughout the history of the Silk Roads, the people occupying the steppe and mountainous regions of Central and East Asia have been known for their high mobility and crucial role in some of the most intense interactions 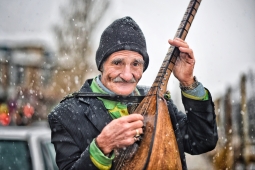 Different forms of music and the various instruments used to create it, spread beyond their regions of origin, accompanying people as they moved along the Silk Roads. 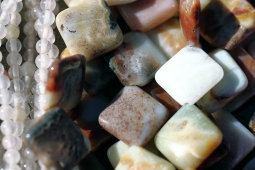 Numerous regions of South and Southeast Asia were directly involved with, and connected by, the maritime Silk Roads at various points in history.