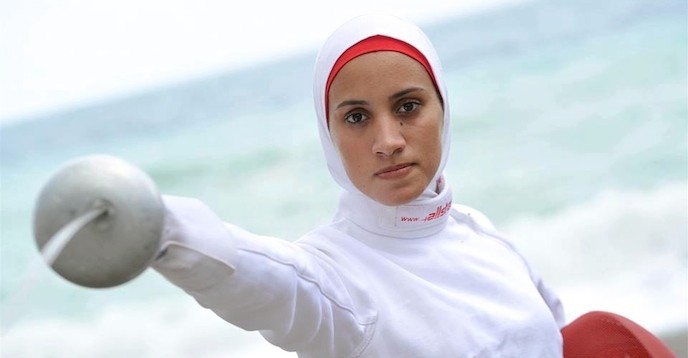 Sport, like many fields of human endeavour, can be harnessed in the pursuit of friendship and peace. The 29-year-old Egyptian athlete Aya Medany, an ambassador for peace, is unafraid to stand up for a principle, but knows the power of compromise. And she has trodden this path since she was just 14, when she started competing in sports.

You made your debut at the Athens Olympics in 2004, aged 15, the youngest-ever modern pentathlete to enter. And you have won dozens of international medals since. How did you get into a sport that is so difficult, with its five different disciplines?

I was born in a family which, unlike many other Egyptian families, did not consider sports to be only for “high-level people”. My parents, who are agricultural engineers, encouraged me to play sports and saved money so I could get into a club and try various sports. I eventually chose modern pentathlon. My father, Mahmoud Medany, a member of the Intergovernmental Panel on Climate Change (IPCC) − that won the Nobel Peace Prize in 2007 with (former United States Vice-President Al Gore − is a big sports fan. He always told me: “You never know how strong you are until you try. When you want to do something, just to do it, whatever it is.”

There were instances when your career and religious beliefs collided. You were permitted to wear a hijab at first, but the sport’s new rules did not agree to a full-body swimsuit. How did you deal with the situation?

I competed in the pentathlon for more than twenty years and began wearing a hijab only after the  Beijing Olympics in 2008 − even though it put me at a disadvantage when I was running. I insisted on wearing it as a way of thanking God for everything I achieved. Two years before I quit, in 2013, I faced the problem of having to remove my hijab because of new international swimming federation rules; I was not allowed to wear my full-body swimsuit either. So I faced a choice: whether to remove the hijab, to give up competing in pentathlon, or to keep wearing the hijab but to wear the conventional swimsuit. I chose the third option, but decided I would keep fighting for the right for competitors to compete with full-body swimsuits.

You held the Olympic torch in front of the Pyramids in Egypt in 2004. As a woman, do you consider this an important symbol for gender equality in your country?

I had a baby after I retired. My husband helped me make the decision to return to sport, so I could help young athletes and young women by giving motivational speeches and teaching them about the importance of sport. In my country, it is unusual for a married woman with children to compete in sports.  Essentially, you are regarded as too old.

I chose to fight and change this culture. I teach married women by example, that nothing is impossible for them, even when they have children. I returned to sport after three years of retirement; marriage is not the end of life.

Changing the culture of a country is not easy, but it is worth the effort even if it hurts you personally − damaging your reputation, for example. People need sport, and they have the right to take part in it anywhere and anytime, regardless of who they are. 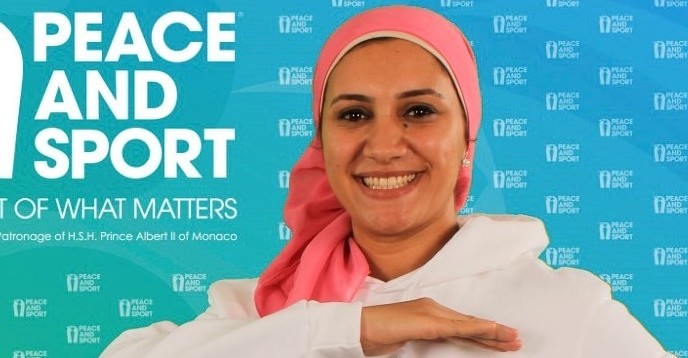 The athletes have a big responsability on their shoulders. As Champions for Peace we need to keep moving and keep our spirit.
© Peace and Sport

You are one of the Champions for Peace for Peace and Sport. Could you tell us more about the organization?

Founded in 2007 in Monaco, Peace and Sport is an independent worldwide organization aimed at promoting sport as a tool for development and peace. The use of sport as a catalyst to strengthen social ties has motivated civil society organizations, the sports movement and decision-makers into practical action. It brings together a team of  Champions for Peace, top-level sports champions from all over the world, still active or retired, who wish to help disadvantaged communities through sport.

What do you do in that role, particularly for youth?

I am involved in sports education. For example, in April I went to a rural school in Egypt and taught about a hundred children fencing and shooting. There were about 200 people altogether, teachers and students. It was the first time they saw fencing and shooting equipment, so it was hard to teach them.

One of my dreams is to teach young people what the meaning of sport is. I love the culture of Chinese and Japanese sports. In Kung Fu, taekwondo, in judo, even in fencing, they must salute before and after they compete. So you can teach them respect that way.

With this article, the UNESCO Courier marks the International Day of Sport for Development and Peace, 6 April.

Aya Medany (Egypt) was born on 20 November 1988 and has played sport since 1995. She represented Egypt from 2001, competing in three Olympics (Athens, Beijing and London). She won her first gold medal at the Youth World Championship in 2002. She retired in March 2013. She is a member of the IOC Athletes Commission, a teacher assistant in the Arab Academy for Science, Technology and Maritime Transport.