The project "Designing a creative cluster ecosystem in Georgia", funded under the EU/UNESCO programme, is helping to establish a creative economy in Georgia which connects creativity, innovation, culture and digital technology.

The stakeholders involved in the transformation of a state-owned property into a creative hub called "Cube in context" played an active role in the EU/UNESCO project. This unique public-private collaboration in the field of the creative hub ecosystem was initially led by an independent creative group in Tbilisi, Georgia, in 2018 but came to life thanks to private sector collaboration with the local municipality, as well as with local artists.

While developing in parallel to the EU/UNESCO funded project, it has provided direct insights on the challenges and opportunities of this process, which helped inform a policy paper that focuses on the best practices and recommendations for new laws and policies that can support and sustain a creative cluster ecosystem in the country.

Funding remains one of the main barriers to the sustainability of these creative hubs and the EU/UNESCO project is advocating for the implementation of national philanthropy-related legislation in order to drive more support to establishing a creative cluster ecosystem.

Nikoloz Nadirashvili, Research Projects Manager and Arts Policy Consultant, who acted as a national expert for the implementation of the EU/UNESCO project in Georgia interviewed one of the co-authors of the project, Anuka Lomidze, who is also a member of the Creative Cluster Council, a multi-stakeholder team supporting this EU/UNESCO project. 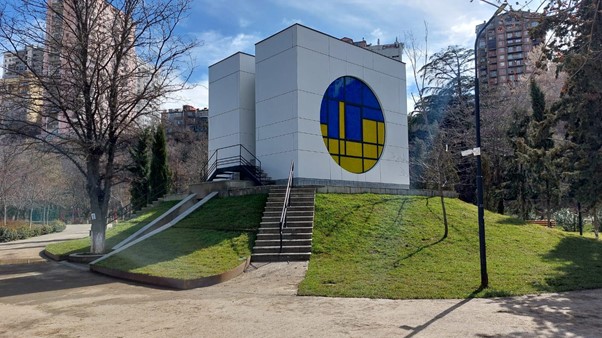 Cube in context: a case study

The idea of transforming this ropeway station, created before the 1990s, into a multifunctional creative space first emerged in 2011. The project was adopted by contemporary artists Koka Vashakidze and Vasil Macharadze and later Anuka Lomidze (film critic), the founder of New Mziuri, Ana Goguadze and Tornike Abuladze (architects), as well as the Tbilisi City Hall.

One of the main objectives of the team was to make the project accessible to the public:  an open letter called on the public and private sectors to cooperate and join forces to create a minimalist gallery, a cultural multimedia library, and a co-working space. The project titled "Cube in Context" aimed to create the Mziuri contemporary art gallery, multimedia library, and much more.

What is the current phase of the project - when is the opening scheduled and what will it offer to the audience in 2022?

Despite the challenges caused by the pandemic, our team, in cooperation with Tbilisi City Hall, has continued to work. This resulted in signing the usufruct agreement at the end of February 2022. The first event was scheduled on 12 March. However, due to the ongoing situation in Ukraine, we decided to postpone the opening. Nonetheless, what we did, without an official opening ceremony was to project a Ukrainian flag on the glass façade of the building. It is our first intervention in the public realm via the new space, aimed at strengthening a sense of compassion from Georgians towards Ukrainians. In parallel, we are committed to organizational tasks, encompassing the development of a business model while programming and resolving bureaucratic challenges.

How do you imagine the Cube business model - what resources should be used to maintain the viability of the space?

“Cube in Context” is a civil initiative reflecting a kind of social sculpture, which mainly belongs to a team of artists; however, almost all of us have some business experience, which has allowed us to develop a strong business model. We will develop a contemporary art gallery, a cultural multimedia library and a co-working space, an art shop, a non-formal education platform - with a pre-defined business plan. Each component will focus on different social issues: e.g., strengthening vulnerable groups and creating favorable preconditions for them to benefit from the services provided by the Cube. As a non-governmental organization we plan to collaborate with foundations and the private sector on a project basis. We think that our vision and objectives correspond to the corporate social responsibility of many potential donors. In this regard, our friends and sponsors already include TBC Bank and Intelcom Group. We are also planning to hold a crowdfunding campaign to facilitate new projects under the motto: “One Can Change”. 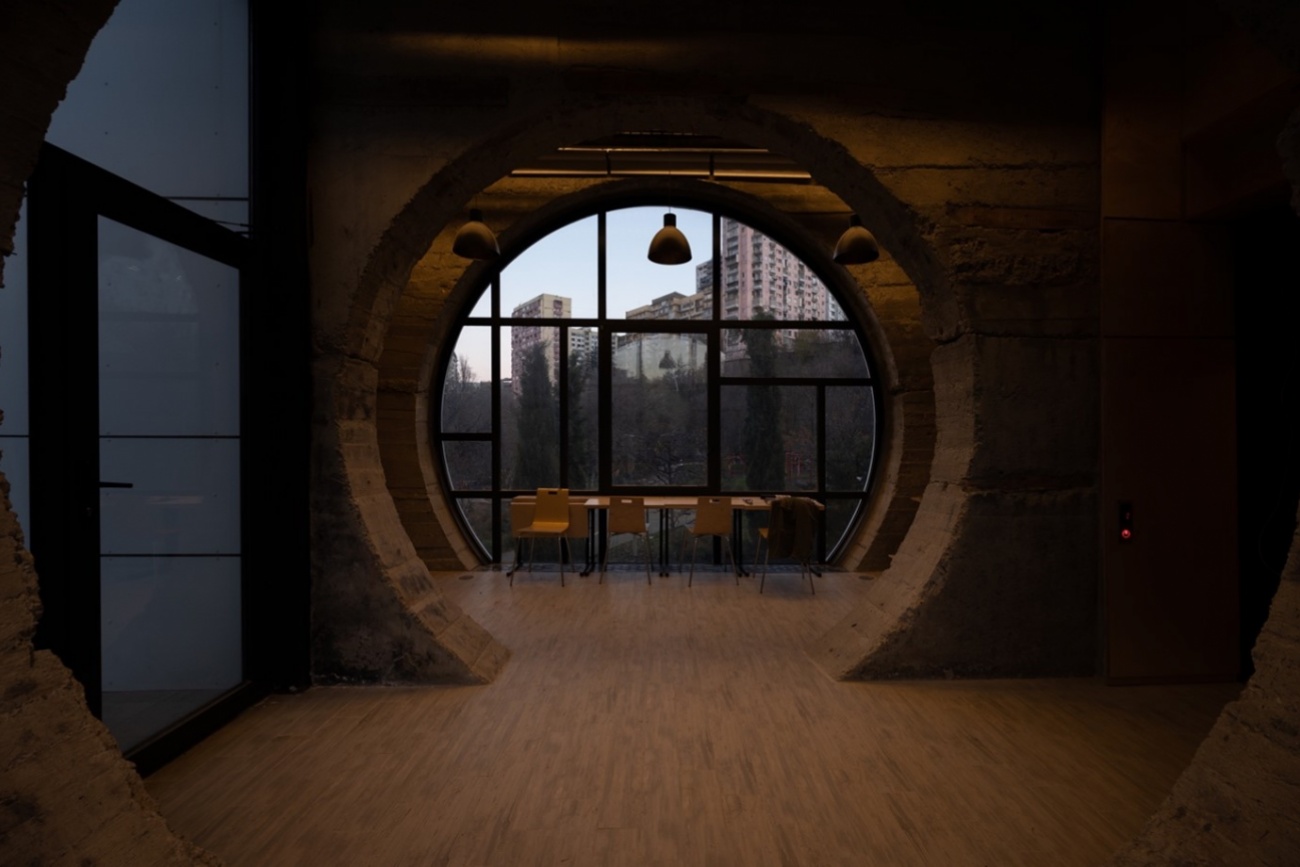 To what extent do you consider the project to be a successful example of public-private partnership?

Despite a series of unsuccessful collaboration attempts with the public sector during eleven years, we can finally consider this project as a successful example of public-civil partnership. As a result of a strong culture of listening we managed to keep enthusiasm towards the project and come up with a shared vision. There are many abandoned buildings in our country. If they all become functional and correspond to public needs, it will be beneficial for all.

What are the current challenges of the project?

Legally, “Cube in Context” obtained the right to plan and implement projects and programmes associated with a rehabilitated building on April 22, 2022. The most important period of the project development coincided with the pandemic; in addition, overcoming bureaucratic challenges took much longer than we expected, and this process was accompanied by the current events in Ukraine. Until now, we could not officially develop project proposals and we were unable to discuss partnership opportunities with new stakeholders, as we were unsure about the future. Therefore, obtaining support from new partners and ensuring the project’s financial sustainability is the most important challenge we are facing. However, we often carry out interesting projects voluntarily by mapping and combining existing resources. When you have an idea and respective action plan, you should not be on hold waiting for the money. Small steps can lead you to the destination and along this process different like-minded individuals can join.

What are the opportunities of Cube in Context?

The potential of the project is unlimited. We do not focus on just one specific scale or scope. It is a multidisciplinary art platform where, by exploiting the instrumental value of culture, we can address various important social issues and engage different demographic groups and people with different experiences. In a few days, Cube in Context will officially register its first sub-organization, an informal publishing house – “Fragment”, in the name of which, in 2020, we printed one of the most important texts about contemporary art theory – “Relational Aesthetics” by French art critic and theorist Nicolas Bourriaud, in the Georgian language.

During the rehabilitation process the genuine characteristics of the building were preserved as much as possible. And the space speaks for itself. As mentioned before, although we had no financial means, we already used the platform to empower our support for Ukraine – all Mziuri visitors are exposed to the Ukraine flag installation.

We want to create a dialogue with the visitors in the space through culture to enable a series of discoveries and new crossing points. This is a major focus of the space for all visitors to enjoy. 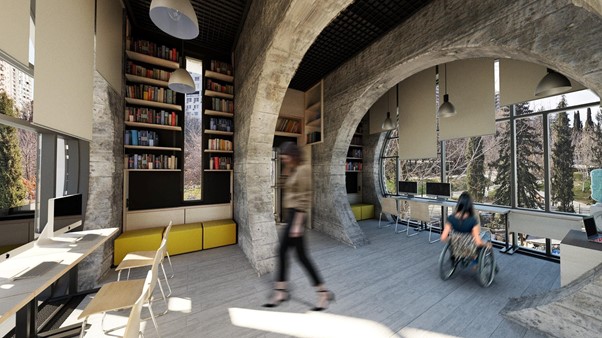 This interview was previously published via www.at.ge