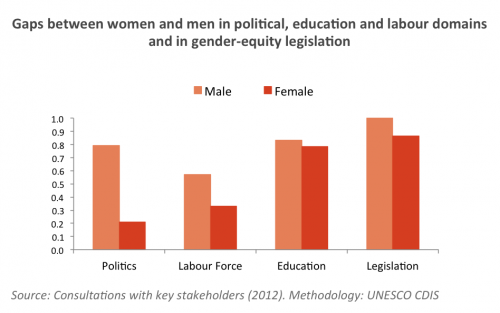 18 PERCEPTION OF GENDER EQUALITY: 65.8% (2001)
In 2001, 65.8% of the people of Bosnia and Herzegovina positively perceived gender as a factor for development, according to their responses to questions regarding three key domains that parallel the objective indicators for this dimension- employment, political participation and education. The final result is a composite indicator, which suggests that nearly two-thirds of the population view gender as a positive factor for development. Bosnia and Herzegovina’s result is slightly greater than the average result for all countries having implemented the CDIS, which is situated at 61.4%. Individuals’ perceptions on gender equality are strongly influenced by cultural practices and norms, thus this result suggests social and cultural norms that largely support gender equality.
However, the perception of gender equality varied according to the domain of the question asked. When asked if “University is more important for a boy than for a girl,” 82.4% of the population responded no, suggesting that education is a domain in which gender equality is more likely to be perceived as positive for development. When asked if “Men make better political leaders than woman,” 67.2% of respondents did not agree. In response to the question “When jobs are scarce, men should have more right to a job than women,” only 47.7% of respondents did not agree. The higher esteem for women’s education and the lower appreciation for gender equality in labour force participation are consistent with the gaps in objective outputs observed. However, the perceptions of two-thirds of the population who favorably perceive women in politics are not reflected by the low percentage of women in parliament.
>> This cross-analysis of the subjective and objective indicators reveals that while some attitudes and values are reflected in persisting gaps in objective outputs, the majority’s positive perception of women in politics is not translated into tangible outcomes. These results suggest a need for greater advocacy efforts targeting attitudes in regards to key domains like employment, while more appropriate measures, programmes and investments are needed to realize objective gender equality in politics and the public sector, as well as to effectively implement the recommendations of the Convention on the Elimination of All Forms Discrimination against Women (CEDAW) 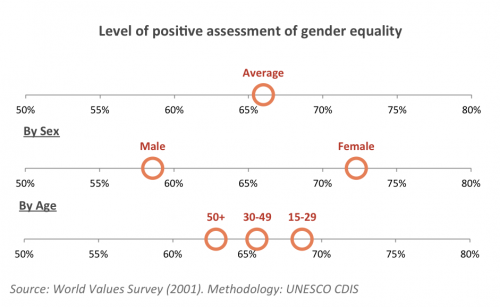